This is a CONFIDENCE story – like the little pigs, you have more resources and support than you might imagine.

Listen to my RECORDING

Read the story below 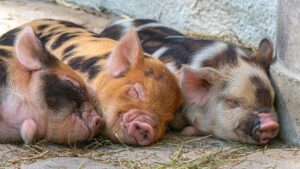 The three little pigs were just sitting down to supper after a hard days work when, all too predictably, a torrent of uninvited jeers and unhelpful comments floated loudly into their living room – yes, the wolf was at their door. This situation had been going on for a long time, too long in fact, and the three pigs decided that enough was enough. It was therefore decided that a plan of action to rid themselves of both the wolf and his unwanted comments was needed, and not a moment too soon.

Their first thought was to keep the wolf from getting too close to their house and to stop the sound of his annoying growl from penetrating into their living room. To this end they decided to put up a large perimeter fence around their hut. They worked tirelessly throughout the night to finish the fence and were well pleased with their efforts by sunrise. The next day the three pigs sat and waited. Sure enough the wolf arrived on time but much to the pigs’ delight no sound was heard. The pigs waited, and waited – nothing. Then and only after a considerable period of time had elapsed, did the three pigs begin to hear the wolf’s unwelcome tirade of words. They heard the usual unpleasant comments, mostly concerning the fate of the three pigs and how their luck would change for the worse very soon.  But one thing did not escape the pigs’ attention: the wolf was far quieter than normal! In fact he was barely audible.

The pigs, buoyed with success, decided to take the fight one step further. Now the three pigs were very popular with the other animals of the forest, all of whom wished to see the back of the wolf as well. That night the pigs gathered many of the animals at their home and a plan was quickly hatched.  The animals would distract the wolf and prevent him from even reaching the home of the three pigs. The following night and as the wolf approached the path that lead to the pigs’ home, he was suddenly confronted by the strongest animal in the forest, the stag. The wolf knew that the stag was more than a match for him in terms of strength and decided wisely to stop and listen to what he had to say.

The stag explained to the wolf in breathless terms that he had just run all the way from the wolf’s own home where it was on fire. On fire! exclaimed the wolf! On fire! exclaimed the stag. There is not a second to lose. And with that they both turned and ran in the direction of the wolf’s house, with the wolf completely forgetting the purpose of his visit to this part of the forest. When they arrived back the wolf knew that he had been tricked: there was no fire and is house remained intact.

Back in the living room of the three pigs there was, for the first time in a long time, nothing to be heard except the peaceful background noises of the forest, and nothing to be seen except the big smiles on the faces of the three pigs. That night the wolf decided not to bother making the long trip back to interrupt the pigs’ evening. Now the wolf’s increasingly pathetic and futile attempts at getting to the three pigs were beginning to get him down. And events the following night did nothing to improve his flagging self-esteem, for as he approached the hut of the three pigs, he was confronted by a large gathering of forest animals, all of whom were holding various signs telling the wolf what he should do with himself. One sign said ‘invites

.only’, another said ‘don’t call us, we’ll call you’, while another simply said ‘go away’. Mocked and embarrassed, and now, finally, humiliated, the wolf turned his back on then three pigs and was never seen or heard of again.

Teaching Stories
The Cat and the Horse
Melon King
The Restless Man
The Scorpion and Frog
Two Wolves
Chief Minister
The Beggar
Mbala
Meeting on Train
Farmer, Son, Horse
Three Fishes
The Frogs and the Snake
Bad luck, Good luck
Travellers
The Men and the Fruit Tree
The Emperor’s New Clothes
The Princess and the Coats
The Fish and the Turtle
The Feuding Neighbours

Resources to use Now